How the Co-Founder of Mother.ly Keeps her Family Safe

Northern California was just plagued by record-breaking wildfires that covered over one million acres, destroying thousands of homes. As ash from the fires began to fill the sky, many nearby residents, including co-founder of Mother.ly, Jill Koziol, began to worry their families could also be affected by the unhealthy air spreading through the area.

This is a reality many families face during Fire Season. Smoke and ash from fires contain harmful particles that can spread into the air and cause a variety of health effects, including aggravated lungs, asthma attacks, respiratory infections, and more—and this is assuming the smoke is from a forest fire. Fires that have burned buildings and homes containing plastics and other synthetics can have other toxins and chemicals in their smoke as well.

As the fires began to spread, Jill and her neighbors woke up each day faced with a difficult decision: to stay with their homes or evacuate their families, and risk losing everything they owned. Jill understands the importance of keeping her family safe—she has two children and is co-founder of the online community, Mother.ly. This was her family’s first time living near a dangerous forest fire, and when asked about the experience, Jill can still recall the feeling of hopelessness and uncertainty: “…it was so scary and we weren’t sure if we should relocate until the air quality had improved.” 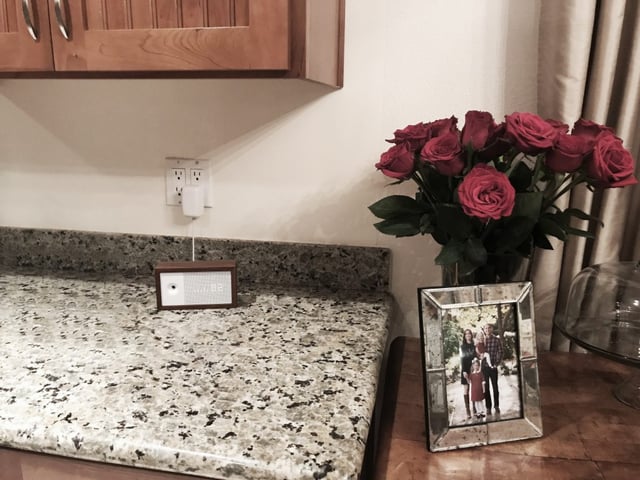 Awair tracks toxins and chemicals in your air and gives you personalized recommendations to help you stay safe and healthy. The Koziol’s had been using Awair in their kitchen to make sure the chemicals that are typically a byproduct of cooking weren’t harming their children, but when the fire smoke crept into her neighborhood, Jill began to use her Awair to make sure their home had air that was safe enough for her family to live in.

Awair’s tips helped Jill buy an air purifier to help clean out any harmful particles that were threatening to enter her home. In the evenings, she would move her Awair from the common space to her daughters’ room to make sure they were breathing healthy air as they slept.

With the help of Awair, the Koziol’s were able to safely stay in their home until the fires were contained, and we're glad they can now be safely home for the holidays!

Do you have an #AwairStory? We’d love to hear! Email us at hello@getawair.com to share.

As the second installment of our Awair Design Spotlight, we interviewed our San Francisco-based Principle Designer, Maher Sinjary, to learn more about his unique design journey and the methodology...

If you’ve ever listened to the podcast 99 Percent Invisible, then you know how transformative good design can be — and how infrequently it gets the attention it deserves. At Awair, our design...

How a Yoga Studio finds Peace of Mind with Fresh Air

When Brandi Sharkey became pregnant with her first child, she realized how important it is for a new mother to have a community that she can turn to for support. Wanting to provide this sense of...