The Truth Behind Why We're Tired After Thanksgiving Turkey

Every year on Thanksgiving we find ourselves in the same pattern: eating much more than we promised we would, then spending the evening fighting the expected wave of fatigue. As we struggle to keep our eyes open, we’re reminded of the common myth that the turkey dinner is to blame--we’ve been told that turkey contains tryptophan, which is a chemical responsible for making us feel tired.

Although some relatives may still insist it’s the turkey’s fault, the tryptophan myth has been disproven by multiple experts.

Despite this evidence, being tired on Thanksgiving is a widely accepted certainty--so what could be the cause? True, while there’s something to be said about being worn-out after seemingly hours of eating, we were suspicious that there’s more to the story.

After a bit of investigating, we realized that while tryptophan isn’t to blame for Thanksgiving drowsiness, there could be another common culprit. 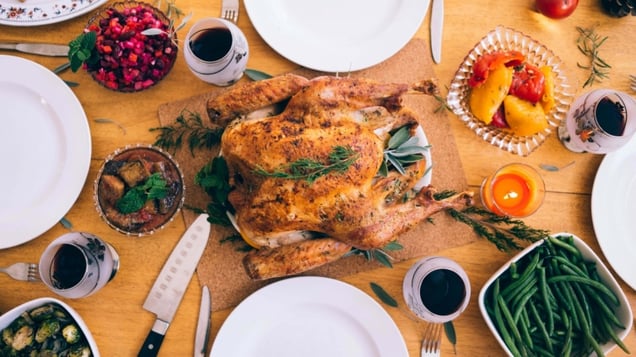 It all began when we were sharing Thanksgiving recipes at the office, and one of us mentioned how they noticed a change in their air quality when they were cooking the night before. They knew about this change with the help of Awair 2nd Edition, a device that tracks toxins and chemicals in your air, then gives your personalized tips and recommendations to help you stay safe and healthy. This observation piqued our curiosity: if the Awair detected a change in air quality while our coworker was preparing dinner, is it possible that cooking could make the air quality in your home worse?

If you’re wondering why we’re so concerned with air quality, you’re not alone--many of us believe that the air we’re breathing is healthy, safe, and won’t have much effect on us since it’s not something we can typically see. But this isn’t the case, especially for air that’s indoors. In fact, indoor air can be 5x more polluted than outdoors, which can affect allergies, asthma, productivity, and more–even our quality of sleep.

If something as common as cooking could have an effect on our air quality, then it’s definitely worth investigating. To test this theory, we performed a quick experiment that day by cooking using both a stovetop and oven, and tracked our air quality with the help of a nearby Awair 2nd Edition. After a little over an hour, we decided to check and see how our air was doing via the Awair app: 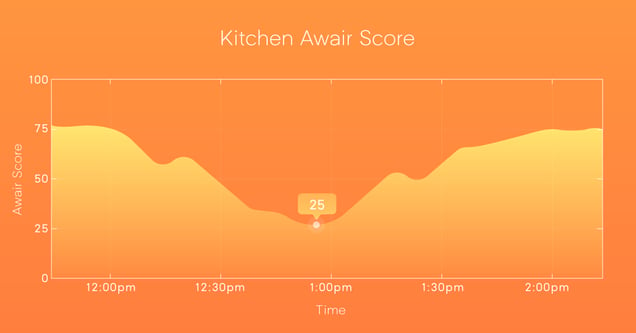 The “Awair Score” is a color-coded scale that helps you understand the quality of your air at a glance. It’s a 0 to 100 scale, with 0 being poor air quality and 100 being healthy.

Although we started off at a moderate score of 75, the moment we began cooking--shortly after noon--our Awair Score took a steady dive, reaching its lowest point with a score of 25, after about an hour of cooking.

An Awair Score of 25 is very concerning--it’s considered “Poor” on the scale and is indicative that the air could begin to negatively affect our health.

Now that we had proven that cooking could have a negative impact on air quality, our next question in this case, naturally, was: how?

That’s when we were reminded of the tryptophan myth--chemicals are known to give us side effects, including drowsiness. Maybe the chemical culprit that causes us to be tired on Thanksgiving wasn’t in the turkey, but instead was in our air.

Our air is filled with a variety of different factors that determine how healthy it is, from fine dust, to carbon dioxide, to its levels of humidity, to chemicals.

The type of chemicals typically found in your air are called VOC’s: volatile organic compounds. “VOC” is an umbrella term used to describe any organic chemical that evaporates easily at room temperature–and this trait is what helps make VOCs very common.

We decided to take a look at the readings from  Awair’s specific VOC sensor during our cooking experiment: 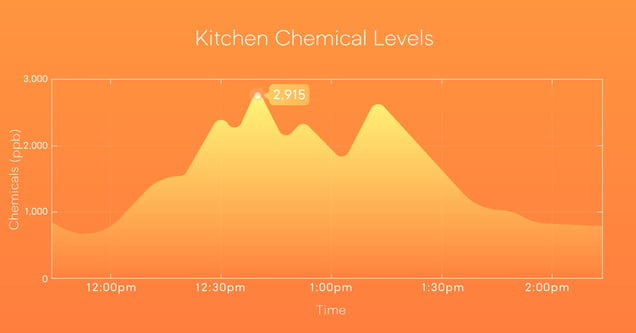 Almost immediately after we began cooking, the VOC levels in our kitchen spiked well above the healthy recommended average of 1,000 parts per billion (ppb).

We realized you can accidentally add VOCs to your air while you cook. If you use a gas stove, carbon monoxide and other harmful VOCs can also leak into your air.

It’s important to keep VOC levels in your home low since they’re notorious for causing a variety of health effects. Short-term effects of VOC exposure have been known to cause dizziness, coughing and sneezing, headaches, nausea, sinus congestion, irritated eyes, nose, throat, and skin--and fatigue.

Were VOCs the only cause? While conducting this experiment, we were reminded of various studies conducted worldwide about the relationship between Fine Dust and cooking.

Fine Dust, specifically known as PM2.5, is particulate matter that can be found in the air that is incredibly small–a single particle has a diameter of less than 2.5 micrometers, which means you can easily fit 40 fine dust particles across the width of a single strand of hair. Fine Dust size renders it practically invisible; it can only be detected with an electron microscope.

Although it may be small, Fine Dust shouldn’t be underestimated–in fact, its size is what makes it more formidable. Unlike larger (and more visible) dust particles, PM2.5 are able to bypass your nose and throat and be absorbed by your lungs and bloodstream.

We decided to check our Fine Dust graph to see if our experiment could have released any traces of PM2.5: 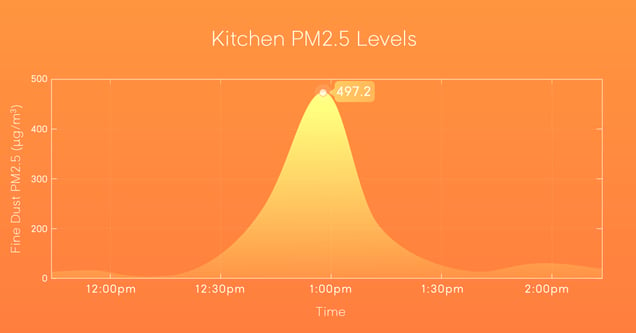 Just as we saw with the VOC graph, a clear spike in Fine Dust levels occur just as we began cooking, quickly climbing to levels that are known to be unhealthy. Oil and grease from stove-top cooking can evaporate into your air, releasing fine PM2.5 particles as it turns to smoke.

Unhealthy levels of Fine Dust can lead to a variety of side effects, including coughing, wheezing, shortness of breath, and--once again--fatigue. 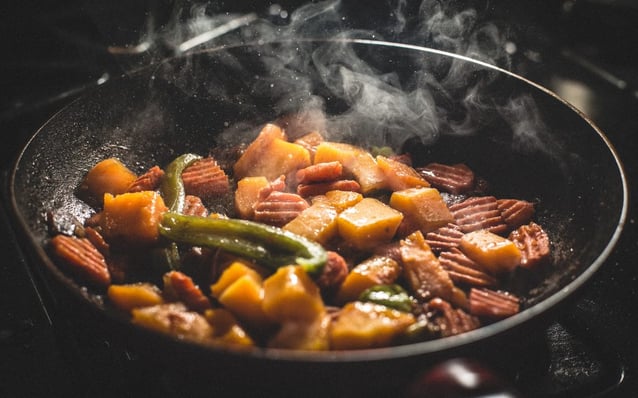 Many of us attend Thanksgiving celebrations that are an all-day event--and a cooking marathon. It’s very possible that, if we were to be near a kitchen with a steady amount of cooking throughout an entire day, we’d start to experience the side effects of VOC exposure, causing us to slip into that familiar Thanksgiving drowsiness.

If you’re concerned about being exposed to too many chemicals during Thanksgiving, your best bet is to get as much fresh air as possible. If you noticed from our graphs, the air became significantly better in the kitchen after we made a few quick changes to let in some fresh air.

Here are a few tips to promote healthy airflow in a home during Thanksgiving:

The air we breathe is a delicate balance of a few key ingredients, and many of us don’t realize that even small, common changes–like cooking–can completely disrupt the balance, which has the ability to affect our health and well-being. Awair tracks chemicals and toxins in your home and alerts you when pollution levels become unhealthy. To learn more about Awair and how it can help you create a healthier home environment, follow the link below.