For most U.S. citizens, air quality isn’t top of mind. The air generally looks clean, and it’s easy to ignore what’s not immediately apparent. That changed for many northern Californians during the Paradise, CA wildfire last year. For weeks, everyone around Sacramento, Santa Rosa, and San Francisco was wearing a face mask and obsessing over pollution reports.

Six months later, most people in the San Francisco Bay Area have retired their masks and returned to their scooters. But when brush fires around Mexico City caused a similar air quality crisis for nine million people last week, wildfires and air pollution crept back into our consciousness. We decided to revisit the topic of wildfires and investigate the impact that the worst wildfire in state history had on air quality.

When fires burn forests and anything else in their path, they produce water vapor, C02, and a variety of other organic chemicals. As these elements are released into the atmosphere, they bind with other naturally-occurring elements and form noxious gasses such as nitrogen oxide — a pollutant typically associated with fuel combustion.

In addition to gas, wildfire smoke also contains particulate matter, or PM. The PM present in smoke can range in size and chemical content depending on what the fire has consumed. PM can be as large as wood ash or smaller than a single grain of sand.

How Does Breathing Wildfire Pollution Affect Your Health?

The larger particles found in smoke (PM10) tend to cause the most immediate irritation to our eyes, throat, and nose. While PM10 is cause for discomfort, it’s actually fine dust (PM2.5) that’s considered most dangerous to our health in the long run. Because fine dust is so small, it can travel deep into our lungs and enter into our bloodstream.

Breathing high levels of PM2.5 can cause upper respiratory and pulmonary infections in even the healthiest individuals. For young children, the risks are even more profound. Inhaling high levels of PM2.5 at a young age can interfere with healthy heart and lung growth and contribute to the development of chronic respiratory conditions such as asthma. For other at-risk populations such as the elderly and sick, exposure to high PM2.5 can have fatal consequences.

How Did Camp Fire Affect Air Quality in Surrounding Areas?

In addition to being more dangerous, PM2.5 lingers in the air longer than PM10 and can travel further geographic distances. During the Paradise, CA  wildfire last year (November 8, 2018 to November 25, 2018), daily AQI (Air Quality Index) levels of PM and O3 (ozone) suffered across half the state of California. According to Environmental Protection Agency (EPA) data from that period, the air quality impacts extended into Oregon, Washington, Idaho, and Nevada. 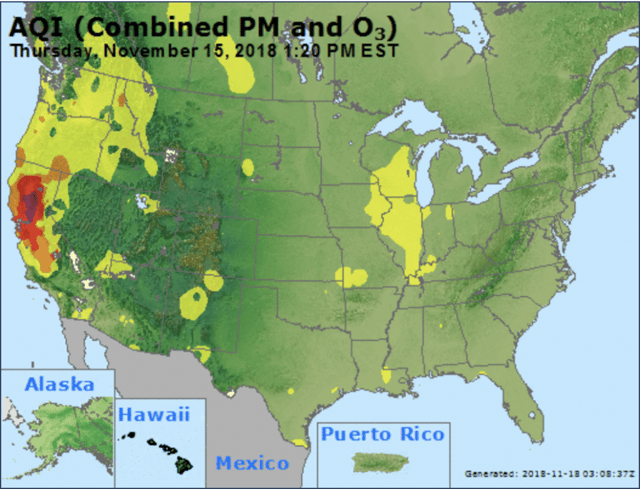 When you compare the above map to that of the same day in 2017 (below), it’s easy to see the overwhelming impact of the fire.

Although the PM2.5 associated with wildfires usually dissipates within a few weeks, this limited exposure can be enough to experience adverse health effects.

What’s the Best Way to Protect Your Health?

When you know that the outdoor air quality is bad, the best thing you can do is limit your exposure by staying indoors and closing your windows. That said, outdoor pollutants such as PM2.5 can enter into your home on your shoes, clothing, pets, and vents, so simply staying indoors may not be enough to protect your health.

To examine the effects that Camp Fire had on indoor air quality, we pulled Awair data in the San Francisco area from the same time period. As anticipated, average indoor fine dust levels began to rise as the fire gained momentum and reached 78.5 μg/m3 (more than double the national safety standard) on November 15th in correlation with rising outdoor pollution. 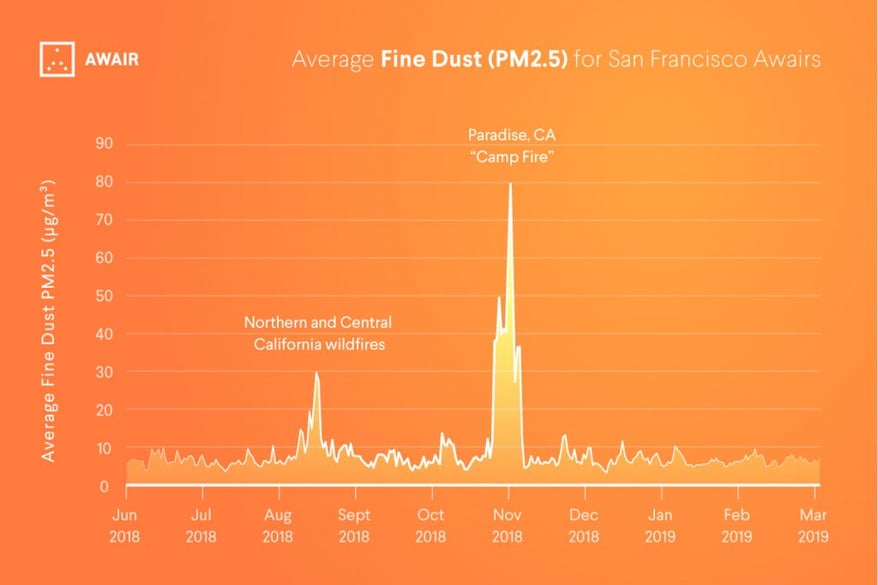 Our data also showed similar, slightly less severe spikes in indoor PM2.5 levels that correlate with the Carr Fire, Mendocino Complex Fire, Natchez Fire, and Ferguson Fire. All four wildfires occurred around northern and central California and reached their peak in late July and August of 2018.

Be Prepared This Wildfire Season

Making simple changes such as taking your shoes off at the door and wiping down household surfaces with a wet cloth can help reduce the amount of fine dust you track into your home.  During critical pollution periods when opening a window isn’t an option, you may also need to take other precautions to protect your health.

Find out what you can do to stay health this wildfire season by checking out our 9-step Wildfire Smoke Guide below.

Is Indoor Air Quality Making You Tired on Thanksgiving?

Every year on Thanksgiving we find ourselves in the same pattern: eating much more than we promised we would, then spending the evening fighting the expected wave of fatigue. As we struggle to...

Winter Indoor Air Quality: Preparing for the Cold Months Ahead

We know. It's difficult to believe the winter solstice and the holiday season are already here.  Unfortunately, the cold season is one of the worst times of year for indoor air quality, either at...