Is Your Commute Affecting Your Health?

Have you ever woken up ready for a full day of work ahead, only to find yourself completely exhausted by the time you’ve reached the office? If you have, then our next question for you is: do you ride the train to work?

While there’s something to be said about the stress of a morning commute wearing you out, taking the train or subway to work somehow feels like a substantially exhausting ordeal at times.

This was something we began to ponder one day at the office, when we noticed that those of us who rode the train to work consistently felt groggier in the morning that those who drove or biked to work--despite the fact that, on average, everyone would wake up and commute around the same time. What made the train riders feel differently, then? Some said it felt like their average morning sluggishness was magnified once they began riding the train--almost as if there was something in the air that was putting them to sleep.

That might not be too far-fetched. Could there be something in the air inside train cars that causes commuters to feel more tired?

We decided there was only one way to find out--for two weeks, we rode the train to really find out what’s in the air we breathe on our commute.

Our experiment was simple: every weekday for two weeks we rode the underground commuter train through downtown San Francisco during peak rush hour. We’d ride the train in one direction for four stops, then turn around at the final station and ride a second train back in the opposite direction. This is a very common route during the week--an estimated 60,000 people are passing through by train in each direction.

To test the air quality in the train cars, we brought along Awair--a device that tracks toxins and chemicals in your air, then provides you with personalized recommendations to help you stay safe and healthy. Awair focuses on tracking the five key factors that affect your air quality--temperature, humidity, dust, carbon dioxide, and chemicals.

The factors that help determine your air quality have been known to cause of a variety of health effects; having an impact on allergies, asthma, sleep quality, eczema and other skin conditions, and have even been known to give flu-like symptoms. If the air on our morning commute were to influence how we physically felt, it most likely could be traced back to one or more of these factors.

So, were we able to find any evidence that the train’s air quality could be affecting our overall health during our morning commute? 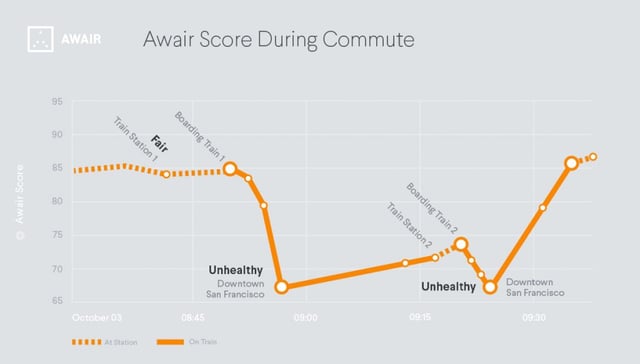 While waiting for the train at the station around 8:30am, our air quality was in the “Fair” range. The moment we brought Awair onboard the 8:45 train, however, the Awair Score rapidly dropped, reaching unhealthy levels around 9:00am, as the train was passing through a very busy downtown San Francisco.

After riding four stops, we’d leave the train we were on and wait at a station just outside the city. After a few minutes at the station, we’d catch a train heading in the opposite direction--back into the city--usually around 9:20am. Again, we saw a drop in the Awair Score once we boarded the second train--and an almost immediate rise in the Awair Score once we had ended our commute and exited the train.

The Awair Score was clearly warning us that there were unhealthy levels of one or more of the five factors that affect indoor air quality. After looking through the data we had collected for each individual factor, we were quickly able to see our two culprits:

The moment we boarded the first train we saw a dramatic spike in the levels of carbon dioxide: 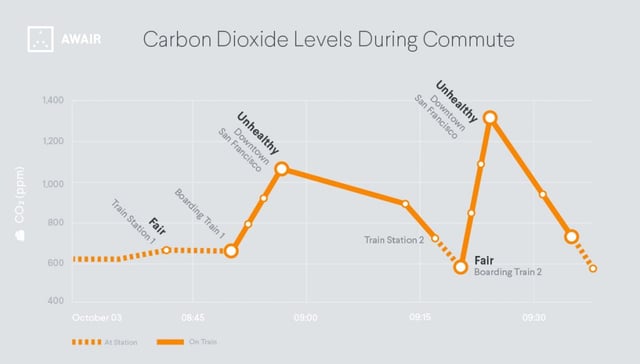 Carbon dioxide is by no means a toxic gas–it’s a very natural ingredient in the air we breathe. Humans play a role in adding carbon dioxide to our air, since we exhale about 2.3 pounds of carbon dioxide every day. While we may not notice carbon dioxide in our air the same way we would for other gases, it’s very important to keep it in moderation.

If there’s an above-average amount of carbon dioxide in the air you’re breathing, you’ll begin to notice some side effects, including decreased productivity, headaches, difficulty making decisions, and drowsiness–which can feel a lot like the commute haze our coworkers distinctly feel while riding the train.

Similar to carbon dioxide, we saw a spike in the level of chemicals throughout our morning commute:

The type of chemicals Awair is specifically concerned with are called VOC’s: volatile organic compounds. VOCs are notorious for irritating a list of health effects, including fatigue and confusion--which could have been another source of our problem.

VOC’s are much more common in the air we breathe than we realize–to the point where they are almost impossible to avoid–because they can be found in most common items, including paint, sealants, and cleaning supplies. It’s very possible that VOCs lurk inside train cars, off-gassing from seat upholstery, beauty products and clothing other passengers are wearing, materials used to make the car--even (and sometimes especially) after it’s been freshly cleaned.

What can you do to avoid unhealthy air quality during our morning commute?

Based on what the graphs can tell us, the best way to escape the high levels of carbon dioxide and chemicals on board the train is to step out onto the platform for some fresh air--you should begin seeing positive effects even after a few moments of being outside. If you can, try to build time into your morning commute to get a few breaths of fresh air before entering the office, you’ll feel much more refreshed and ready to take on a new day.

Many of us take for granted that the air we’re breathing is healthy, safe, and won’t have much effect on us since it’s not something we can typically see–but this isn’t the case, especially for air that’s indoors. In fact, indoor air can be 5x more polluted than outdoors. If you can’t control the air on your commute, you can always control the air in your home! One of the best ways to make sure your home has air that is safe and healthy is by understanding what’s in your air with an indoor air quality monitor, like Awair.