Have you ever felt tired after what seemed like a full night of sleep? If you’re feeling drowsy throughout the day, you aren’t alone—over ⅓ of Americans feel they aren’t getting the quality of sleep they need. Sleep is so important for our overall mental and physical health, yet so many of us struggle with feeling truly well-rested.

The key to a better night’s sleep might be easier than you think; it all begins with the air in your bedroom.

While everyone has their preferences for how they like to sleep–extra cold, slightly warm, and so on–research has shown us there are a few factors that can negatively impact your quality of sleep. These factors happen to be directly related to your indoor air quality.

Many of us take for granted that the air we’re breathing is healthy, safe, and won’t have much effect on us since it’s not something we can typically see–but this isn’t the case, especially for air that’s indoors. In fact, indoor air can be 5x more polluted than outdoors, which can affect allergies, asthma, productivity, and more–even our quality of sleep.

According to our data, over 1/3 of bedrooms have air that is unhealthy for a good night’s sleep. With so many people being affected by their air as they slept, we realized it was time to find a solution that could help anyone get a better night’s sleep.

That’s when we decided to answer a question we’d been pondering: could you get a better night’s sleep with your bedroom door open?

This isn’t as far-fetched as it sounds. What we set out to discover, specifically, was if we could control the levels of carbon dioxide in a room.

We decided to test our “open door” theory in the same room—a 320 sq ft bedroom—over the course of two nights. To measure the air quality in the test room throughout the night (specifically, our carbon dioxide), we placed an Awair on the room’s nightstand, a device that tracks toxins and chemicals in your indoor air, then gives you personalized recommendations to help you stay safe and healthy. Next to the Awair was a phone with the Sleep Cycle app, which would track our test’s REM cycle throughout the night.

We kept the door closed during the first night of the test. Here’s what we were able to learn from the Awair app: 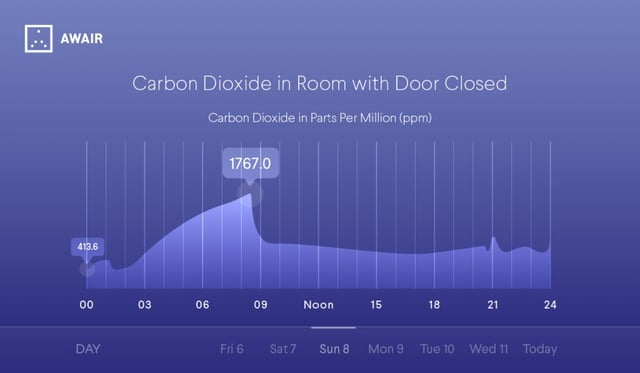 Our test subject—one of Awair’s engineers--slept from midnight until about 8:30 am, after which point they woke up and left the room. The graph tells us that the room filled with carbon dioxide as they slept, peaking at 1,767 parts per million (ppm)—and our recommended average for a good night’s sleep is about 1,000 ppm. This isn’t too surprising, since each person exhales about 2.3 pounds of carbon dioxide every day—and without the help of any fresh air flow, carbon dioxide can quickly take over the air in a room.

Taking a look at their Sleep Cycle, it seems they weren’t able to reach a consistent REM cycle, and only reached a deep sleep once, and for a brief moment, during the night: 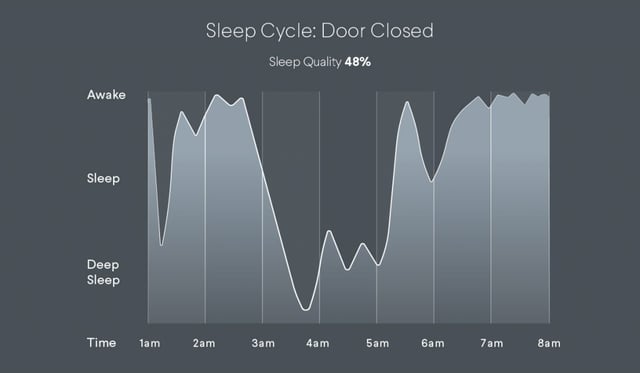 With the first night behind us, we let our engineer sleep for a second night in the room, this time with the bedroom door open throughout the night: 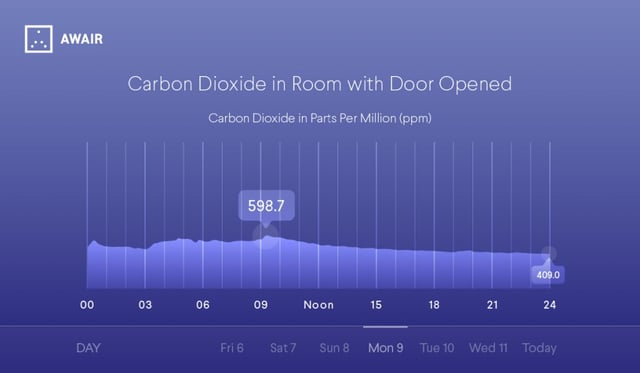 Our engineer went to bed and woke up around the same times as the night before, however this time it’s less easy to see when exactly that may have been—their levels of CO2 were steady throughout the entire night. In fact, sleeping in a room with the door open decreased their levels of carbon dioxide by more than half. With the help of the open bedroom door, fresh air was able to enter the room and keep the levels of carbon dioxide at bay.

Did this have any impact on their sleep quality? 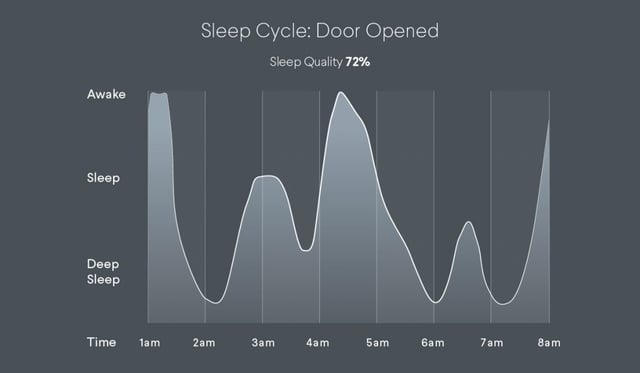 It looks like our engineer had a much healthier night’s sleep, reaching a deep sleep more than once throughout the night. Overall, their sleep quality increased by 24% from the night before—reaching a 78% by sleeping with the door open.

Could something so simple like sleeping with the bedroom door open impact your sleep? From what we can see: yes! The air we sleep in has a much bigger impact on us than we realize, however we can sleep in perfectly healthy air with the help of a few simple changes.

Take Control of the Air You Breathe

Understanding how the air in your bedroom affects your quality of sleep can help you have healthier and more restful nights. Of course, it isn’t easy to keep track of your air and sleep at the same time, which is why an indoor air quality monitor, like Awair, can help.