Why Are You Tired On Rainy Days?

About a month ago, San Francisco woke up to a dilemma. Plans were canceled, commutes were re-strategized. Many contemplated not going in to work for the day.

What is it about rain that makes us reach for a blanket and want to spend the day with a good book or a Netflix marathon? True, there is the universal disdain for standing in the wet and the cold, feeling our socks slowly soak through. But what about the undeniable brain fog we feel on rainy days--the feeling as if we’re moving throughout the day in a dream?

We had a feeling there was something that must contribute to that “rainy day feeling” beyond the weather, but we weren’t quite sure what it could be. Then, on a rainy June morning, inspiration struck.

It all began when we received a notification: 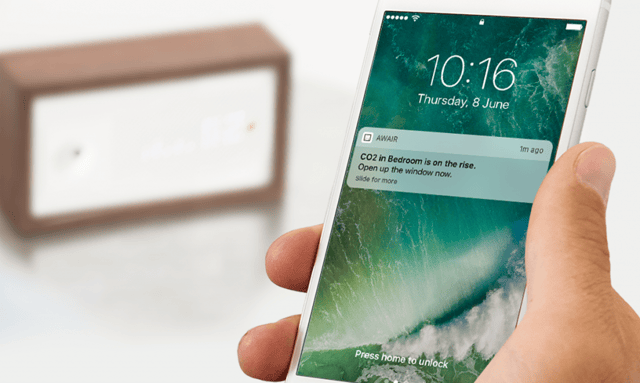 Specifically, a notification from the Awair app.

Awair is a device that tracks toxins and chemicals in your air, then provides you with personalized recommendations to help you stay safe and healthy.

The notification piqued our curiosity, so we decided to click on it. We were taken to a real-time display of the air quality in the particular room the Awair was tracking:

It seemed as though the room began to aggressively fill with carbon dioxide, one of the five key factors that affect the comfort and safety of the air we breathe. We’re a little obsessed with how our actions affect our air quality, so when we saw this sudden change in CO2, we began to realize that we were on to something.

Based on what we could see from the Awair app’s graph, we had a hunch that we weren’t the only ones who received the notification about CO2. We decided to check the database of everyone else in San Francisco who used Awair to track the air quality in their homes, and noticed their CO2 levels looked similar to ours.*

San Francisco is a fairly large city, so it was suspicious that everyone was almost simultaneously experiencing a spike in carbon dioxide in their individual homes. To see if this had anything to do with that particular day, we took a step back and looked at the average levels of carbon dioxide across the entire week...

Across the board, everyone had lower carbon dioxide in their homes the day before--a day that also happened to be partly cloudy and 62℉.

The evidence seemed to be staring us in the face: when it’s raining outside, the levels of carbon dioxide in our indoor air rise significantly.**

Why does this matter?

Carbon dioxide is by no means a toxic gas--it's a very natural ingredient in the air we breathe. Humans play a role in adding carbon dioxide to our air, since we exhale about 2.3 pounds of carbon dioxide every day. While we may not notice carbon dioxide in our air the same way we would for other gases, it's very important to keep it in moderation.

If there’s an above-average amount of carbon dioxide in the air you’re breathing, you’ll begin to notice some side effects, including decreased productivity, headaches, difficulty making decisions, and drowsiness--which feels a lot like the rainy day brain fog.

So does this mean the rain outside causes the carbon dioxide inside to rise, giving us side effects? It’s actually not directly the rain’s fault.

Before reaching for a blanket or contemplating calling in sick for the day, what’s the first thing we do when we notice it's raining outside? We’ll most likely do a lap around the house and close our windows, lest the rain creeps into our home and soaks our furniture--and this is where the trouble starts.

Without a way for fresh air to properly flow into our house, we begin unknowingly pumping those 2.3 pounds of carbon dioxide into our air, and after a short while we’ll probably begin to feel its symptoms.

The air we breathe is a delicate balance of a few key ingredients, and many of us don’t realize that even small changes--like closing a window--can completely disrupt the balance, which has the ability to affect our entire day.

Want to have a more productive rainy day? If you can, try running the exhaust fan--the fan will help absorb CO2 by pulling air inward. If you notice the rain has subsided, open your windows for a bit to let in fresh air.

Interested in how the air in your home is affecting your comfort and health? Awair can give you the insight you need to create a healthier home environment.

*This information is kept anonymous.

**Since we love being honest as much as we love our air, we double-checked this data by comparing averages over a longer period of time and with a T-Test.