It may surprise you to learn that the state known for its lush forests, beautiful beaches, and progressive environmental policy is home to some of the most polluted cities in the continental United States. According to the American Lung Association’s 2019 State of the Air Report, Californian cities placed first in three different air pollution categories: ozone (O3), annual particle pollution (PM), and short-term particle pollution.

Out of all 228 metropolitan cities measured, Los Angeles ranked first for ozone (O3) pollution and was fifth highest for annual PM2.5 pollution. Counterintuitively, Fresno, Madera, and Hanford (located in the Central Valley about halfway between L.A. and San Francisco) ranked highest for annual PM2.5 pollution, despite being less populated than other major metropolitan cities.  Sacramento, San Diego, San Jose, San Francisco, and Oakland all made it into the top 10 most polluted cities in America.

So why do Californian cities have such poor air quality? One reason has to do with the sheer volume of people living in the state (around 33 million). The more people there are living in an area, the more pollution is generated by households and vehicles. On average, the carbon footprint for a single American is 20 metric tons per year.

On top of this, California is an industrial hub. The Pacific coastline is a natural point of entry for raw materials and goods shipped from overseas, making it an ideal location for U.S. manufacturing and distribution. As a center of production, California has high energy requirements and an abundance of fuel storage facilities — both things that can contribute to atmospheric pollution. In addition to taking a toll on the environment, chronic air pollution can have long-term health impacts on city inhabitants. This reality has led California policy makers to pursue lofty sustainability goals which have helped to reduce greenhouse gas emissions throughout the state.

What is Temperature Inversion?

As a general rule, air temperature decreases as elevation increases. During the day, the ground retains heat produced by the sun and naturally warms the air closest to its surface. As the temperature near the ground increases, the air becomes less dense and rises higher into the atmosphere, becoming cooler as it gains elevation. As long as the air closest to the ground remains warmer than the air above it, the air will continue to circulate in this fashion, with clean air flowing in to replace the air that has dissipated. 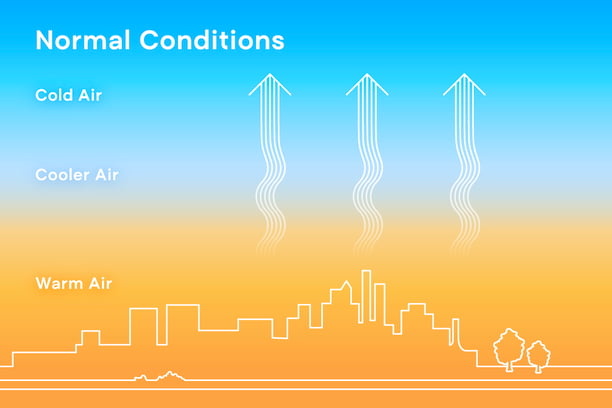 When this natural convection process is reversed, (i.e. the air close to the ground becomes cooler than the air directly above it) it's called temperature inversion. In instances of temperature inversion, the higher, warmer air serves as a barrier that prevents pollution from escaping and limits the amount of clean air that reaches the ground. 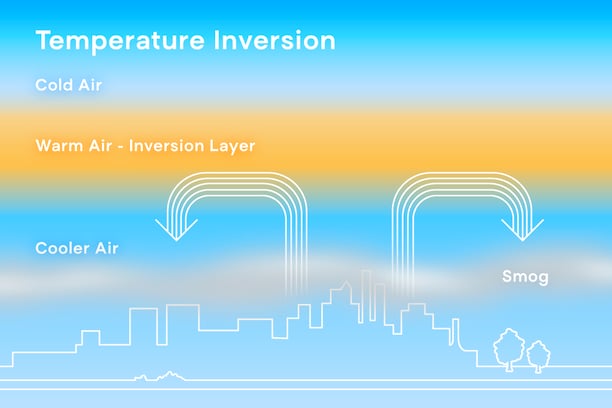 In California, there are two major causes of temerpatures inversion: upwelling and topography.

Upwelling is a natural process that occurs in coastal regions. As the wind blows along the coastline, it pushes cooler water towards the ocean’s surface (i.e. toward the beaches). This new, colder water rapidly cools the ground, decreasing the surrounding air temperature and increasing the amount of moisture in the atmosphere. The result is a cooler pocket of air sandwiched beneath a warm front.

Upwelling is also the reason why Karl — the name given to the omnipresent San Francisco fog — is more pervasive in the summer, when sunny days and warmer temperatures create a robust inversion layer. Sunlight also serves as a catalyst for the chemical reaction that produces harmful ground-level ozone pollution, causing more frequent air quality alerts in summer months.

In non-coastal regions, temperature inversion is often the result of dramatic changes in topography. Many California cities are nestled in natural valleys and surrounded by mountain ranges. In such places, cold air falls from mountain peaks down into the valley and becomes trapped under warmer air masses, creating an inversion layer or “cap” that prevents the air from circulating in and out of the valley bowl.

If you look at a topographical map of California, it’s easy to see why so many Californian cities struggle to manage air pollution. 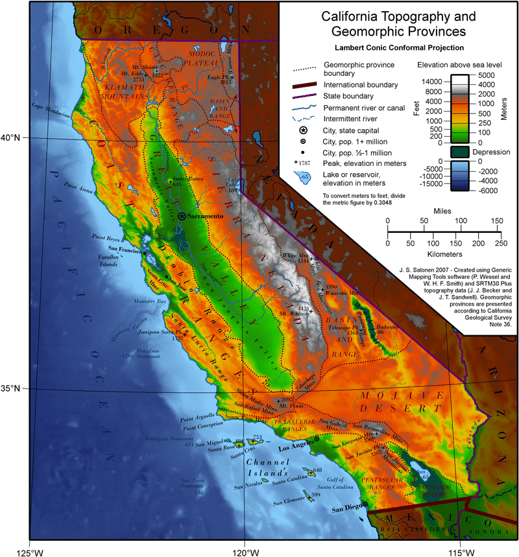 California’s Central Valley covers approximately 18,000 square miles (roughly 11 percent) of California’s total land mass. This valley has some of the lowest elevation in the state and is bordered by the Sierra Nevada mountains to the east and the Coastal Ranges in the west. Visalia, Bakersfield, Fresno , Madera, Hanford, and Sacramento are all nestled at the heart of the Central Valley, where temperature inversion is common. When natural airflow is limited, the concentration of ground-level pollutants created by these cities can quickly climb to unhealthy levels.

Los Angeles is also nestled in a low elevation pocket known as the San Fernando Valley. The city is close to the equator (i.e. receives more direct sunlight) and is sandwiched between the San Gabriel Mountains and the Pacific coastline, making it especially prone to temperature inversion and sunlight-triggered ozone pollution. Similarly, San Francisco, San Jose, and San Diego are nestled into coastal valleys between the Pacific Ocean and surrounding mountain ranges.

In addition to these natural pollution traps, California has experienced some of the most severe wildfires in U.S. history. During the catastrophic 2018 wildfire season, fine particulate matter (PM2.5) levels skyrocketed across Northern California and caused an air pollution crisis in San Jose and the Bay Area.

Simple Ways to Protect Your Health

If you live in a city with chronic air quality issues, use the Environmental Protection Agency's (EPA) Air Now database to monitor outdoor air quality alerts for your area and limit your outdoor time on "Action Days."

Certain sensitive populations (very young, old, or sick individuals) are more susceptible to the health impacts of air pollution. If you fall into one of those categories or have an existing respiratory condition, be aware of days the EPA identifies as “Unhealthy for Sensitive Groups” (USG). When in doubt, consult your doctor about your unique risks and create a plan ahead for air quality emergencies.

Although staying indoors during air quality alerts is a good first step, it may not be enough to protect your health. Oftentimes, indoor air can be more polluted than the outdoor air of even the busiest cities. That’s largely because building materials, household products, and activities contribute to indoor air pollution, and many buildings lack adequate ventilation and filtration systems.

You can’t single-handedly influence outdoor conditions, but you can take steps to monitor your indoor air quality, identify sources of pollution in your home, and transform your home into a clean-air sanctuary.

Awair air quality monitors can help you understand what’s in your air and empower you to improve the health of your home, office, and beyond. To learn more about Awair and how it can help you create a healthier indoor environment, follow the link below.

Mold in Schools Harms Kids: How to Improve Classroom Air

Is the indoor air quality in school impacting your child’s health and academic performance? Unfortunately, there’s a good chance that the answer is yes. A big reason for this is the widespread...

School Absences Due to Asthma: The Role of Indoor Air Quality

How often are school absences due to asthma? Unfortunately, the answer is: it's very common.

Keep Your Child Safe from Unhealthy Indoor Air at School

It’s been a tough year for parents and school kids. Both have endured a historic disruption of the education system, and rapidly shifted to virtual schooling. Many parents set up a place to work...